Walking along the Promenade past the colourful houses and restaurants of Weston-Super-Mare, you reach Knightstone Island on the left and it's worth a detour to explore the area.  It used to be a barren island made of Weston Marble, a dark veined limestone rock, only reachable at low tide, until in 1834  the Causeway was built up.  However, prior to that, in 1820, some hot and cold  salt water baths were opened on the Island together with housing for invalids and restaurants.  Over the years the area was improved to provide the Pavilion Theatre, Edwardian Swimming pool and Dr Fox's Baths however, nowadays, these buildings have been converted into luxury apartments but you can still enjoy a cup of tea at Dr Fox's Tea Room. 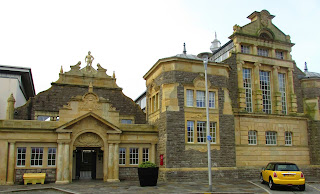 On the mainland next to Knightstone Island, you'll walk past the Marine Beach Lake that retains sea water at high tide. 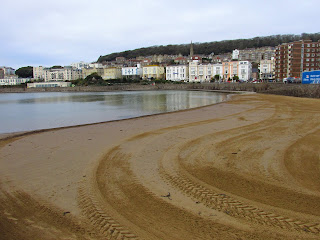 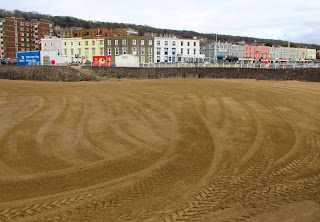 Instead of walking around the Lake near the houses and hotels, we'll be heading down the slipway, which leads to a causeway right in the middle of the water! 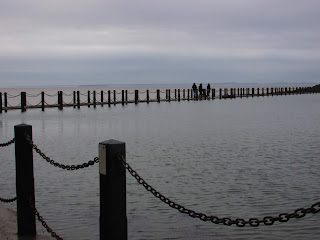 It doesn't look too difficult to cross once you're on it but I should think it's quite dangerous at high tide. 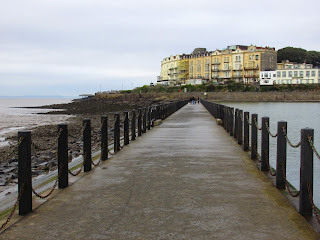 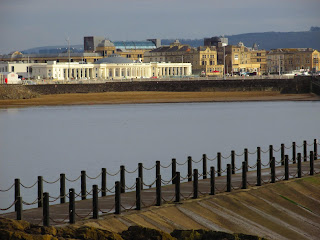 At the end of the Causeway, the path curls round behind the yellow hotel to the left in the photo below.  The path becomes wider with seats surrounded by shrubbery, a peaceful spot to watch the sea race in or splash round a couple of small islands, one with a lighthouse or even look over to the distant coastline of Wales.  If the light is good, you can even make out Cardiff and its buildings. 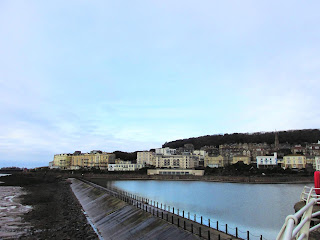 The top of the low sea wall adjacent to the path has been badly damaged by erosion turning the sandstone top into beautiful lacy patterns.  Still the path curls round. 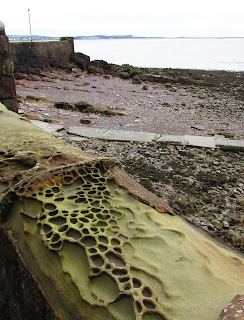 Another pier is revealed, desperately in need of repair with it's spidery legs taking your eye towards a derelict lifeboat station, now relocated to Knightstone, one of the busiest lifeboat stations on the south side of the Bristol Channel .  This is Birnbeck Pier, over 150 years old and unusual in that it leads to Birnbeck Island.  It has suffered much damage from storms and has changed hands often with hopes of restoration but to no avail. 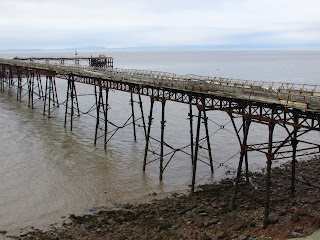 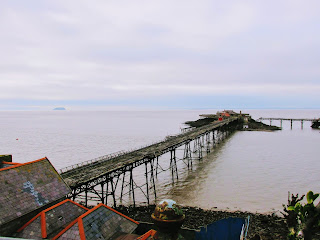 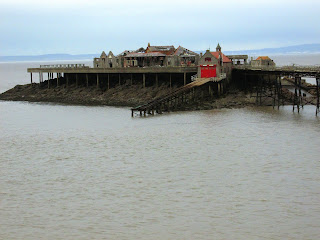 At this point, you have to join the road which becomes quite steep as it follows round Worlebury Hill but it soon becomes clear that, sadly, there has been significant cliff erosion within this area, with houses lost and others no longer habitable.

Next time we'll return in the dark!

Email ThisBlogThis!Share to TwitterShare to FacebookShare to Pinterest
Labels: Weston-Super-Mare