A couple of years ago I wrote a post about Farnham's Museum and how the beautiful house and garden had changed hands and uses over the years.  This time we'll have a peek inside at a few of its treasures.

Hidden away in a perspex box covered by a cloth, is a beaded cap worn by King Charles I.  He gave it to the Vernon family after he stayed with them whilst on his way to trial and eventual execution.  The Vernon's considered it an important gift which should be passed down through the generations of their family. 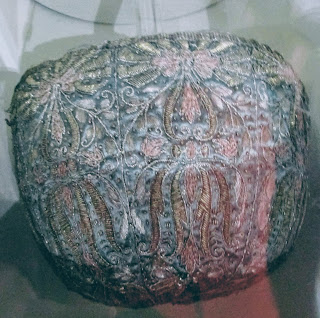 This pretty quilt is full of little flowers and sayings if you are able to zoom in to see them. Ann Esther Peters made it for her granddaughter Marjorie in 1888. What a labour of love. 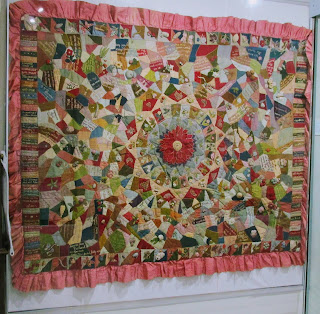 A Victorian post box, not as exciting a find as an Edward VIII one even though it's older. 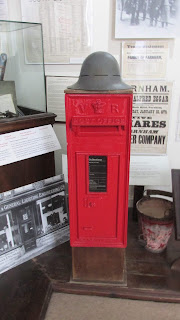 A selection of Farnham Pottery made locally. 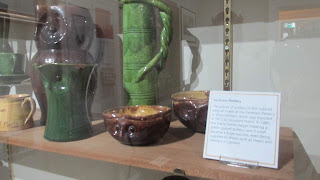 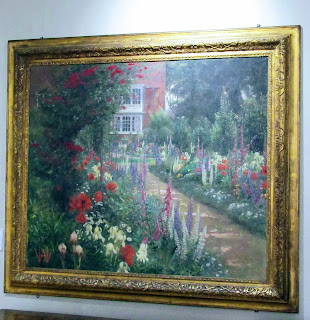 This postillion boot was worn by stage coach drivers.  They wore one ordinary boot on one foot plus one of these on the other to protect their legs from being squashed as it dangled in between the two horses. 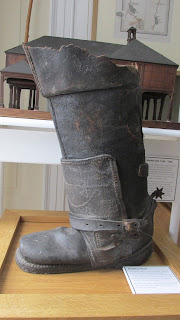 Outside in the garden, there was plenty to enjoy. 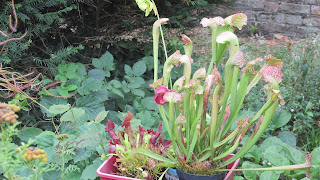 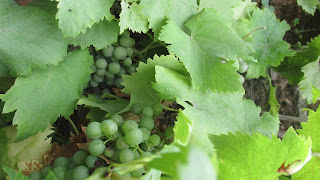 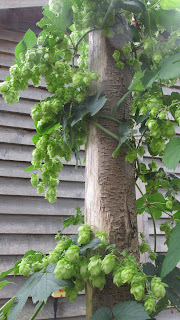 One thing we didn't see that we had heard about at Farnham Castle, was a sapphire hat pin, just like one of those in Henry VIII's hat in Holbein the Younger's portrait of him.  A metal detectorist found the pin in the Castle Park and as the King used to hunt there, speculation went wild that it might have belonged to him.

There was a great hoohah as the Metal Detectorist wasn't permitted to search there and then wouldn't surrender the pin.  He was taken to court and had to hand it over plus was ruined having to pay £30,000 in  costs.  Proudly, the Museum put it on display, from where it was promptly stolen never to be seen again.

Email ThisBlogThis!Share to TwitterShare to FacebookShare to Pinterest
Labels: Farnham