Wandering about looking at the street art in the Brick Lane/Shoreditch areas, I came across a tour group standing outside these houses in Wilkes Street and Fournier Street, well they are rather unusual, aren't they, with their large windows and shutters.

It turns out that these houses used to belong to silk weavers that were Huguenots (Protestants) exiled from France, a Catholic country.  King Charles II offered sanctuary to these people in 1681 and between 40,000 to 50,000 Huguenots fled to England, half of which settled in London, mainly round Spitalfields.  The area became a thriving silk weaving area and with the availability of more silk, the upper class fashion of the day incorporated the material.  Many of the weavers built their own houses and the French influence is still seen in the street names of the area. 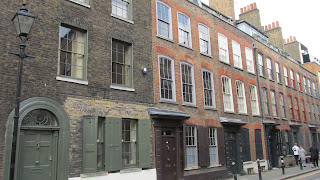 This area has become very affluent and the houses sell for over £2 million these days.   It is a haven for the famous like Tracey Emin, Gilbert & George,  Samantha Morton, Keira Knightley, Jeanette Winterson who live or have lived in the area. 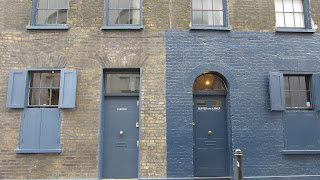 Spitalfields itself is famous for its huge market.  Spitalfields actually takes its name from a hospital and priory, St Mary Spitall, that was on the site in 1197 but it wasn't until 1682 that King Charles II granted a Royal Charter for a market to be held and in 2005 the area was regenerated to provide a market every day with a vibrant scene. 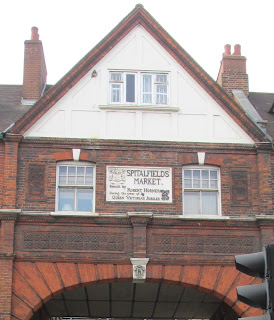 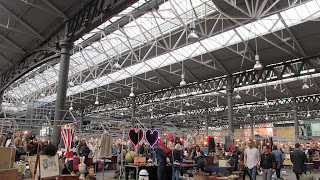 Not far from the market is the famous street Brick Lane, which was just a pathway through a field before the 15th Century whilst nowadays is a hub for Bangladeshi cuisine, the delicious curry smells make you feel hungry, as well as a place for the arty crowd.  An eclectic mix.

We'll have another look round the area later on.

Email ThisBlogThis!Share to TwitterShare to FacebookShare to Pinterest
Labels: London