Still in Henley-on-Thames, we are staggering round the drinking establishments today!

The first inn you spot as you cross over Henley Bridge is The Angel on the Bridge.  It is the only pub on the river in Henley and its cellar contains the stone abutments of the old wooden river bridge built in 1170 which was damaged in the Civil War. The current bridge was built in 1786 and has heads representing Thames and Isis carved by Anne Seymour Damer on either side.  She was reputedly the first woman in England to wear black silk stockings! 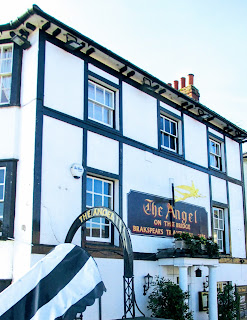 Just across the road with all of its international flags waving in the breeze, is the Red Lion Hotel which has been a coaching inn since the 1600s. King Charles I and Oliver Cromwell stayed there and The Prince Regent, later King George IV, is reputed to have eaten 14 of their lamb chops in one sitting. 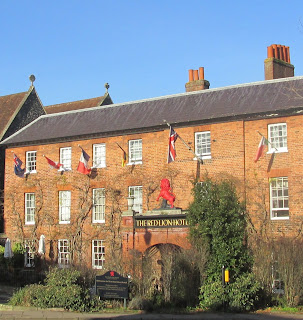 The Queen Victoria in Market Street has a great pub sign. 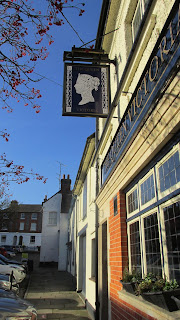 There used to be a workhouse opposite The Row Barge, a 16th Century coaching inn, in West Street.  Starving families and tramps used to gather outside desperate for a meal and somewhere to stay.  Nowadays, it is quite different.  The pub sign shows a replica of a royal barge built for the film A Man for all Seasons, with Princess Anne being rowed up the regatta course in 1977. Do click on the photo to zooooom in. 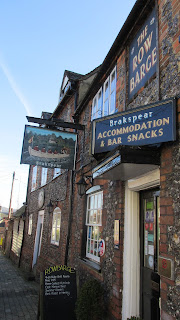 In Bell Street, you find The Old Bell, the oldest pub in Henley, which has been tree-ring dated to 1325 and is probably the surviving wing of a larger house. 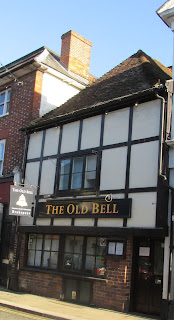 Just across the road is The Bull, which has some walls one metre thick.  Said to be haunted by the ghost of a young woman and the smell of tallow candles, this pub has two plaques to show that it was insured by two firebrigades to be on the safe side, which, until 1868 were needed to be displayed before either of the two companies would put the fire out. 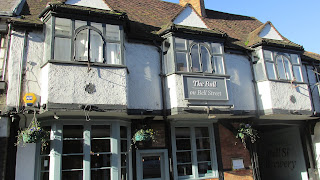 The Imperial Hotel greets you as you leave the station.  It is being refurbished but looks striking against the blue sky. It was built around 1897, designed by William Theobalds 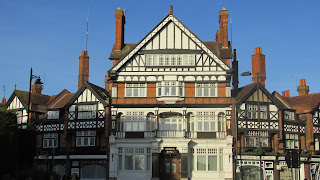 There are, of course, other pubs in the town as well, like the 17th Century The Argyll, which has been filmed as part of the Midsomer Murders series and The Catherine Wheel, which along with other Henley buildings, is also reputed to have the ghost of Mary Blandy haunting it.

Email ThisBlogThis!Share to TwitterShare to FacebookShare to Pinterest
Labels: Henley