Five on Friday - More than Meets the Eye in Henley

We are joining Amy for Five on Friday today.  Finding some places which had more to them than met the eye on my visit to Henley this week, I am going to share them with you now.

High on the hill overlooking Henley-on-Thames, you come across the entrance to Friar Park a 120-bedroomed mansion, which was built in 1899 for eccentric solicitor Sir Frank Crisp.  You can't see the house itself from the entrance but, according to the Henley Guide, it is an architectural fantasy in red brick, stone and terracotta all extravagantly mixed together.  Throughout the house, friars are used as decorative motifs, some with moveable noses to switch on the lights! Ha!  Within the 62 acre garden is a scale model of the Matterhorn with waterfalls, bridges, gnomes, stepping stones and grottos.  Eventually it became the home of Musician and former Beatle, George Harrison in 1970 and he lived there until his death in 2001. 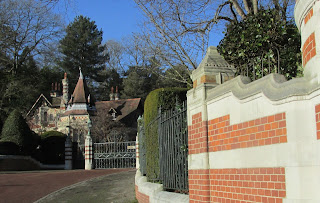 Resting in a small garden not far from the gates of Friar Park, this stone formed by the compression of clay and pebbles, is called a  pudding stone and is a relic of the Ice Age.  When commercially quarried and polished, the mottled red 'marble' was used to make kitchen worktops. 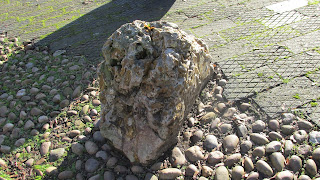 In the same garden is this painted apple.  Henley is twinned with Leichlingen in Germany which is known for growing apples and berries.  The town is also shown on the painted apple so I suppose it marks the twinning of the two towns. 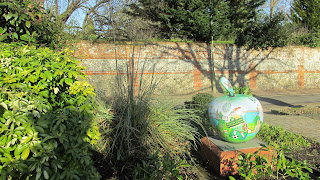 Halfway along New Street, you come across Anne Boleyn Cottage amidst the pretty half-timbered houses. It may have been named that in Victorian times but could pre-date King Henry VIII's second wife by 100 years.  Interestingly, the door has many filled in holes where locks would have been, as in those times, keys and locks were removed and taken to the new house when the occupant moved. 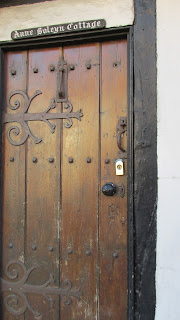 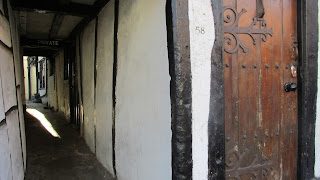 Many original features of the 300 year old Brakspear Brewery have been retained in the buildings where beer was brewed for their 150 pubs and supplied to hundreds of others, even though it is now a hotel. A 200ft artesian well in the brewery provided 38 million gallons of spring water annually. The malthouse across the road has been converted to apartments but they give a suggestion of what used to be on the site. 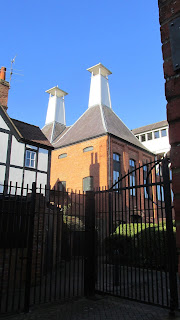 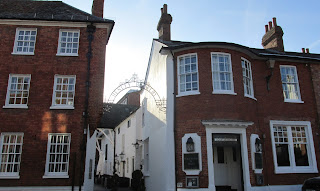 I hope you enjoyed these rather unexpected places of interest in Henley.

Email ThisBlogThis!Share to TwitterShare to FacebookShare to Pinterest
Labels: Five on Friday, Henley