A trip to Watts Gallery has been enhanced by a visit to the recently refurbished Studio which is part of the house that George Frederic Watts and his wife Mary lived in from 1891. They had spent time in the area and enjoyed the surroundings and decided to build a house in Compton.  Their friend Andrew Hitchens got it all organised for them ( even paying for it, with the money reimbursed years later) engaging Architect Sir Ernest George.  The Arts and Crafts style house stands high up on the hill overlooking the Gallery which blends in really well with the other local buildings. Of course the Gallery was built later, in 1904 a few months before Watts died. 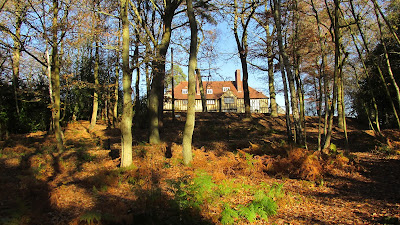 It's very exciting as their 'little' house and studio have only recently been acquired by the Watts Gallery Trust as since the days when the Watts lived there, the house had been converted into three private dwellings. The Studio was acquired first and following the restoration, the remaining parts of the house suddenly became available giving rise to a scramble to raise the funds in time. Fortunately, due to short term loans this was achieved and now the Trust is trying to decide on the next steps. I'll tell you a bit about the house in another post as I was able to look round on a tour.

Walking up through the wooded path to the Studio, you pass a Celtic cross designed by Mary to mark the old Pilgrims Path from London to Canterbury which runs through the grounds. When it also became necessary to build another road through the grounds as a bypass from Guildford, Mary engaged Lutyens to design a bridge to carry the road which had two crosses high up on it, also to mark the Pilgrims Way. 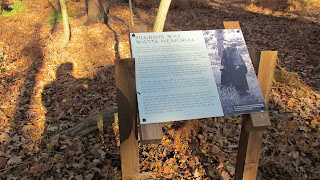 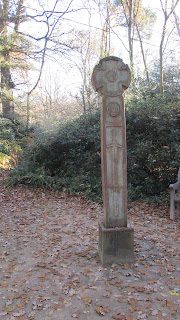 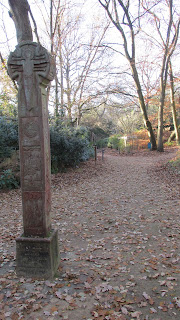 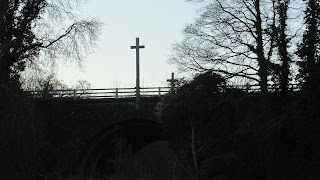 Up at the top of the hill, you can see the Studio window dominating the right hand side of the building. The smaller building to the right is the entrance to the Studio, a new part built into an existing workshop which provides the reception area. 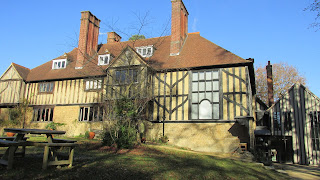 As part of the refurbishment, a large window was built into the Studio wall to enable the enormous paintings to be lifted in and out of the house on their way to the Tate or elsewhere. 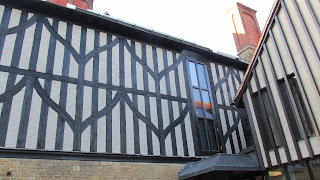 Up the stairs, there's a room giving information about the house and the Watts, then you enter a Gallery dedicated to Mary Watts' work. She in fact lived there for 34 years after George died and was very involved with art and the community. There are some beautiful panels which were created for Aldershot as well diaries, books, paintings and designs. I spent ages opening the drawers and lifting the curtains to see the artefacts inside.  The stages of how the decoration was made is brilliantly shown on the table and in a film and there is a display of the stages of how maiollica pottery is made too. 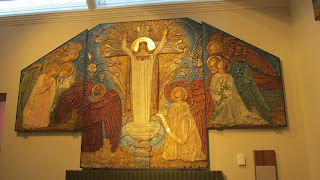 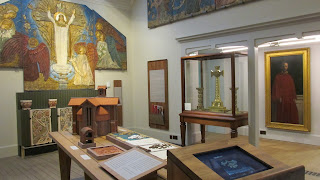 Entering George's Studio, you can see it how it might have looked if he had just popped out. The enormous The Court of Death painting dominates and it is secured over a slit in the floor where it could have been lowered so he could paint the top.  His desk is covered in paints and letters to paint suppliers. He used to buy ready made paint and tinker with them to see if he could make the paint last longer and he also made his own paints. 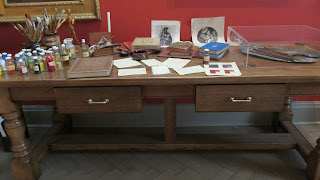 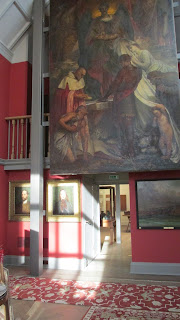 It's a wonderful space full of interesting things to ponder over.