Following on from yesterday's post, we are just entering Eton College Chapel.

Founded by King Henry VI, the Chapel initially had 14 services a day with an establishment of 10 priest Fellows, 10 chaplains, 10 clerks and 14 choristers and was a place of pilgrimage.

What an impressive place! You enter the Antechapel where brass plaques commemorate Etonians who died in wars and adventurous endeavours and 47 shields for Etonians that died in the Crimean War. I noticed a painting of Sir Galahad by G.F. Watts and a statue of Henry VI.

You can't fail to miss the richly decorated organ with 4,000 pipes and then you are into the Chapel which has some late mediaeval murals. The fan vaulted roof leads the eye towards to East End where a Burne-Jones designed tapestry (woven by William Morris) stands on the Altar.

The glass in the Chapel was destroyed by a bomb in 1940 and was replaced by The Crucifixion and The Last Supper by Evie Hone and eight side panels designed by John Piper and made by Patrick Reyntiens based on the parables and miracles of Christ all with a theme of success and failure - The Miraculous draft of fishes, the Feeding of the five thousand, the Stilling of the Waters, the Raising of Lazarus, the Light under a bushel, the House built on Rock, the Lost Sheep and the Sower.

Hone was due to make two of the side panels but died before she was able to, so John Piper took them on as well. His windows  make a transition from the rich dark colours of the Hone East window through the lighter colours of his designs to the clear windows following on. He started in 1959, finished in 1964 and was offered £1,000 a window.

Piper said when they were completed "I have enormously enjoyed working on the College Chapel windows . . .I hope they will give pleasure to many people - and to some of the boys!"

They certainly gave me a lot of pleasure but sadly I couldn't take any photos. I have found these on the internet though to give you an idea of what a small part of them look like. 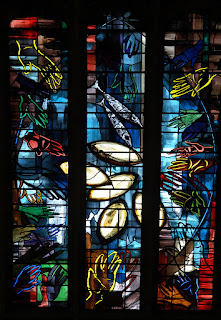 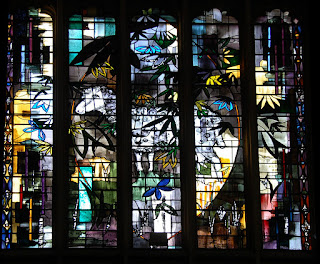 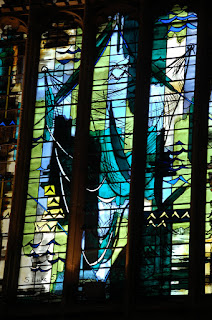 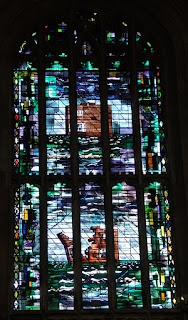 Needless to say you can't beat seeing the sun streaming through enriching the colours splendidly.

My other John Piper posts are here.