Thanks for your messages, I don't have access to the internet at the moment except in short bursts so I haven't been able to read all your posts but hopefully will be back to normal soon. I'll have a lot of catching up to do which will be lovely! Meanwhile I've been finding out about this Artist.

Giovanni Bellini will be the subject of many new books and celebrations in Venice next year as it will be 500 years since his death in 1516.

He was born into one of the two leading painting dynasties of Venice of the 1400s. His father Jacopo Bellini was a great influence on his work. He painted using some aspects of older style Byzantine art, some of International Gothic style shown in the folds of the fabric but also perspective, light and nature from progressive Florentine Renaissance work.  The main focus of the paintings were for devotion so in his Madonna and Child with Lionello d'Este, Mary was painted much bigger than the surroundings and the commissioner of the painting was shown as a tiny figure in the foreground as was the tradition. His many, important drawings showed perspective and architecture and were bound up into two books following his death and taken to the Sultan in Constantinople showing how well regarded he was as an Artist.

Giovanni was born in 1430 a year after his brother Gentile. They worked together with their father and their brother in law Andrea Mantegna who was also a great influence. Whilst Gentile concentrated on scenes of Venice and portraits, Giovanni painted  sacred conversations and altar pieces with some portraits and mythological subjects. The brothers belonged to the richest of the Confraternities, that of St. Mark in Venice, and painted the enormous, grand St Mark Preaching in Alexandria together, which reminds the viewer of St Marks in Venice but with items to reflect the fact that is meant to be Alexandria. The light and shade used gives a 3D effect.

The altar pieces of the day were very Gothic, sculptural, ornate with expensive frames and colours including lots of gold, whereas Bellini introduced landscape, classical ideas, soft transitions between light and shade, a more natural 3D effect using perspective and overlapping people. The paintings reflected the architecture of the churches where they were placed and seemed to be inviting the viewer into the painting.  Giovanni's earlier works seemed more sombre, icon-like and sculptural whilst the later ones were more natural with more realistic anatomy. The colours chosen were well balanced and not so garish. 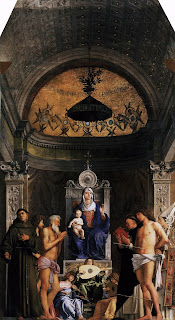 Portraits in those days usually consisted of either a tiny image of the painting's commissioner within the artwork or a portrait as part of a group of people for example the Confraternity.  However around this time, wealthy people started to commission their own portraits which started off with the background being plain and rather dark with the emphasis on the face. His famous portrait of the Doge was unusual as it was a front view unlike the traditional coin-like profile paintings of previous Doges.  The fabric looks sumptuous. His eyes reflect the setting sun, perhaps suggesting the passage of time. The light and shade is very effective and helps convey on his face both the public and private sides of the Doge. 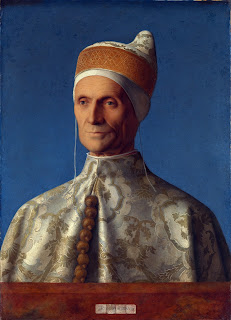 This is just an introduction to Bellini from a lecture I went to during the week.