I am sorry I have been somewhat out of touch recently as I have been away researching places to tell you about!  I'm now back home again, with sensible access to the internet, goodness, how you miss it when it's not available.

My Five on Friday this time, thank you Amy for the link-up, is a taster of our short break to the Worcester area.

One - a tasty treat

You have to try all the cakes you see when on holiday obviously.  This one was in  a tea shop in Great Malvern.  It's a ginger and lemon crumble cake.  A really nice combination of flavours.  The ginger cake was a sponge, topped with lemon icing with a splattering of brown sugar on the top. 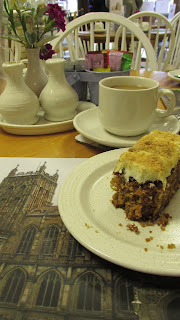 These cakes were traditional lemon drizzle and coffee and walnut, also rather delicious.  The Cloister cafe of Worcester Cathedral was a lovely setting in which to enjoy them.  Can you guess which cup was mine? 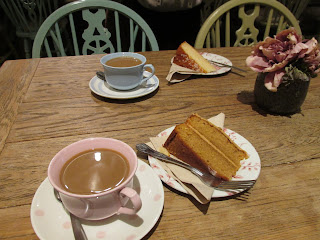 The Lea & Perrins website gives this history of the famous Worcestershire sauce:

'Lea & Perrins Worcestershire Sauce was first created by the Worcester chemists John Wheeley Lea and William Henry Perrins. They devised the recipe in the 1830's when Lord Sandys - a nobleman of the area - was eager to recreate an exciting taste he had acquired on his travels to Bengal.

When Lea & Perrins was first created, it wasn't to their liking and was set aside and forgotten about. It wasn't until the barrels were rediscovered many months later that the taste had mellowed into what we know and love as Worcestershire Sauces. To this day, the ingredients are allowed to 'mature' for 18 months before being blended and bottled in Worcester. Only a lucky few know the exact recipe.' 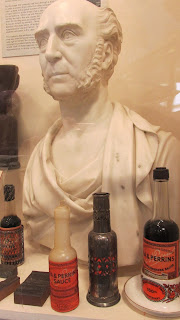 I caught sight of this train ticket dress on the platform of Great Malvern station. 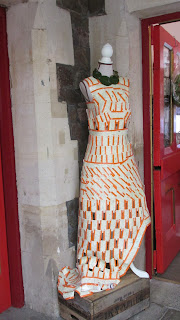 We had to buy a jar of Tiptree's Little Scarlet jam following it's appearance on the TV programme Harvest the night before.  I hope it tastes as good as they said it would! The Grocer that sold it to us said that he had already sold six jars that morning. 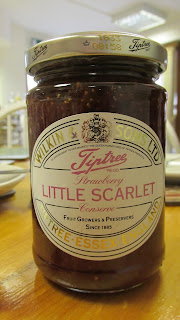 Such a beautiful colourful window! 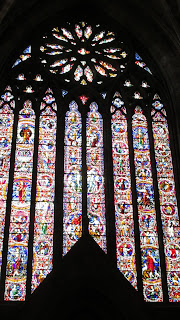 That's all for now folks!

Many thanks for all the messages.  I look forward to reading all about the things you've been up to.

Email ThisBlogThis!Share to TwitterShare to FacebookShare to Pinterest
Labels: Five on Friday, Worcester