Welcome to the blog!

Basing House, situated outside the modern town of Basingstoke, Hampshire, used to be as big and significant as Hampton Court in Tudor times. The older part of the two linked houses was built by Sir William Paulet, first Marquess of Winchester and Lord Treasurer of England in 1535, on the top of the remains of the 12th Century bank and defensive ditches of a castle. The newer of the two houses linked to the older one by means of a bridge and gateway through the defences. Together the houses had five storeys and 360 rooms and was visited by many Monarchs including Henry VIII, Elizabeth I and Mary I and her husband Philip II of Spain who spent their honeymoon there.

Before you all dash off to book a room, sadly during the Civil War the house was attacked three times by Parliamentary troops and in the August of 1645 the walls were surrounded by 800 men. The garrison held out until Oliver Cromwell arrived with the heavy artillery and breached the walls in October.

Nowadays only the foundations and earthworks survive and it's the archaeology that brings it all to life.

The first building you come across are the barns and farm buildings which also house the Visitor Centre. 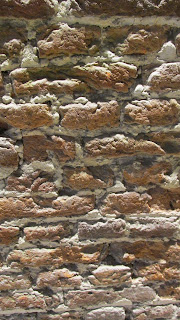 Following the path through the farm buildings, you cross a modern road lined with delightful old houses and enter through the gateway to Basing House itself. 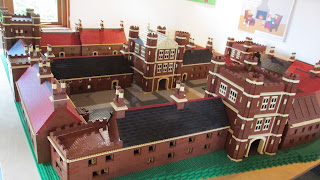 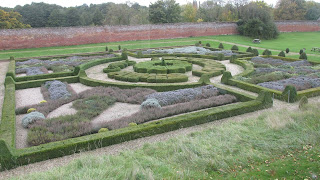 The visits of the Monarchs cost the Paulet family a fortune - £600,000 of today's money when Henry VIII visited. They brought so many people with them as part of their retinue. After a few visits the Paulet's tried to mothball the place to make it less attractive and discourage the visits.

Here's the website with more information and photos of the area.  This is another place bursting with history. The noise of royal bustle and revelry and of battle cries have been replaced by a gentle peace and quiet punctuated by the sound of cars in the distance.

Email ThisBlogThis!Share to TwitterShare to FacebookShare to Pinterest
Labels: History