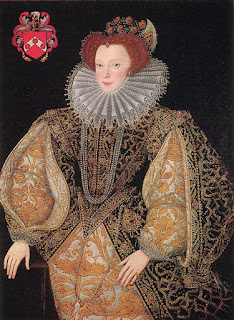 Lettice Knollys. Have you heard of her? I first came across her when I visited Greys Court, a National Trust property in Rotherfield Greys, Oxfordshire. She was born there in 1543* to father Sir Francis Knollys, Queen Elizabeth I's Treasurer of the Royal Household and Katherine Carey, daughter of Mary Boleyn, Anne's sister. This made Lettice a first cousin to Queen Elizabeth I.


During her young life, her family also lived at Abbey House, part of Reading Abbey, leased to the family by the Queen and then became a maid of honour at court. Similar in appearance to Elizabeth, fashion conscious and lively, she caught the eye of Walter Devereux, soon to become  Ist Earl of Essex. They married around 1560 and had five children, Penelope, Robert, Dorothy, Walter and Francis, who died young. The Earl made two tours of Ireland as Deputy while Lettice and the children stayed behind. She and Robert Dudley, Earl of Leceister and Queens favourite, began an affair and when her husband died in 1576 of dysentery, rumour was rife that he had been poisoned by Dudley who was already under suspicion for murdering his first wife Amy Robsart in 1560, neither of which murders were proven.


In 1578 Dudley and Lettice married secretly at Kenilworth and again at Wanstead while she may have been carrying a child.  Robert, known as the Nobel Imp, their only child, was born in 1581 but sadly died at the age of 3. They managed to keep the marriage a secret from the Queen for a year but when she found out, Dudley, Earl of Leicester was imprisoned for a year at his house in Wanstead and Lettice was declared a she-wolf, never forgiven and banished from court.


Leicester died in 1588 and Lettice had to execute the will as there were many debts and still the Queen was vindictive towards her. Even when her son Robert, 2nd Earl of Essex and another favourite of the Queen, was in prison, she was not permitted to plead for him. Lettice remarried, this time Christopher Blount but when he joined the insurrection with the 2nd Earl of Essex, the Queen had Essex and Blount executed in 1601.

Lettice retired to Drayton Bassett, Staffordshire where she lived until 1636*. She died aged 94 on Christmas morning and was buried next to her beloved Leicester at the Beauchamp Chapel, St. Mary's Warwick.


The Knollys family are still remembered in Reading in a street name - Great Knollys Street.


* Sir Francis Knollys' latin dictionary has been found which lists the birth dates of his 14 children.  It seems that this evidence was not previously widely known.  It also strengthens the argument that Katherine Carey was the illegitimate daughter of Henry VIII.