Welcome to the blog.

Let's just walk through the door of Jane Austen's house, just like Jane and her sister Cassandra used to do. Maybe their friend Martha Lloyd or their Mother would be with them, they also lived there. It's sometime between 1809 and 1817, Jane is busy revising Northanger Abbey, originally known as Susan, Sense and Sensibility and Pride and Prejudice for publication. Mansfield Park, Emma and Persuasion would come later.

Have a wander through the house, admiring the new wallpaper copied from original fragments.  I'm afraid you won't be able to creep about as the wooden floorboards creak loudly with every step. Don't forget to look at the artefacts around the rooms - 41 objects are being displayed from letters and books to jewellery and pictures. Why 41?  Because Jane was 41 when she died in 1817 in a house near Winchester Cathedral where she had moved following her health problems. 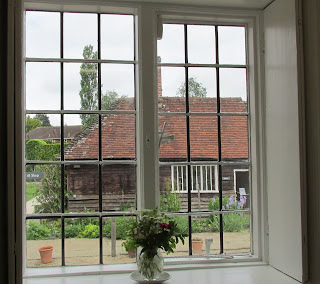 Now in one of the other rooms upstairs is something totally unexpected and marvellous - a patchwork coverlet as well as a muslin shawl both made by Jane. 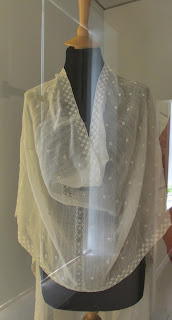 The gorgeous quilt was behind glass and too big to get it all in the photo so apologies.  Hopefully it gives you an idea of the thousands of diamonds and the tiny tiny stitches.  While I was there, an interview  recording was being made. 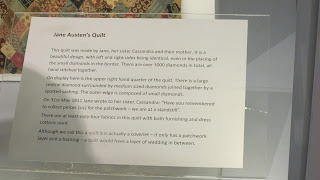 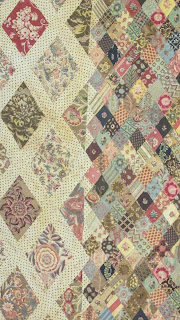 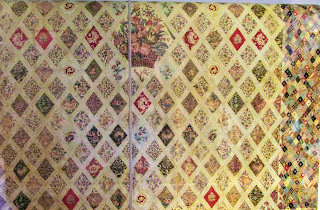 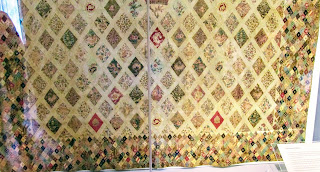 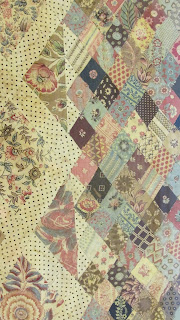 A separate door to the kitchen revealed a spacious room evocative of the era. 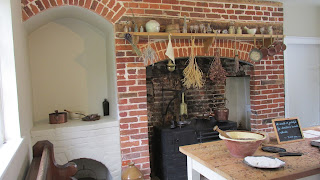 I haven't shown you everything. It's no good, you'll have to go and have a look!