Thanks so much for dropping in.

The Richard Dadd exhibition at the Watts Gallery displays some of his very detailed work.


My photos are just to give you an idea and I would recommend you look them up on the internet so you can zoom in or go and see them in person.  There is so much to see in every square centimetre. The last photo has the tiniest writing, goodness knows how he could see to do it.

Richard Dadd was born in Chatham in Kent in 1817 the fourth of seven children. His family moved to London when he was 18 where his father Robert became a carver and bronze worker and Richard attended the Royal Academy at the age of 20 having sketched seriously from the age of 13. He won silver medals there, exhibited and had a number of commissions for illustrations. He was a member of the art group called the Clique.

Between 1842 and 1843 he and his patron Sir Thomas Phillips travelled extensively round Europe and the Middle East but Dadd became increasingly unwell initially  thought to be sunstroke and headaches but then to be paranoid delusions and violence with an incontrollable urge to kill the Pope during one of his public appearances.

One thing led to another and he ended up killing his father and being placed in Bethlem Hospital's criminal lunatic department known as Bedlam where he was encouraged to paint.  He was moved to the newly built Broadmoor, a high-security psychiatric hospital,  in 1864 where he continued to paint and died there in 1886. Here are a few more details about him.

His paintings are extraordinary as being inside the Institutions, he just painted what he wanted and not to please the public of the time or for commissions. Although he is known as the fairy painter, there are many other works of his that don't have any fairies at all.

On a totally different track, as I have mentioned Broadmoor, another patient there Dr W.C. Minor played a significant part in the compilation of the Oxford English Dictionary and Simon Winchester's book The Surgeon of Crowthorne is a fascinating read about a book we take so much for granted. 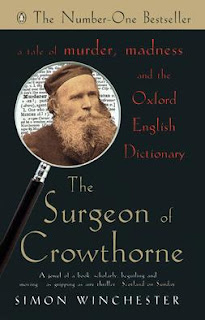 Thanks very much for visiting.